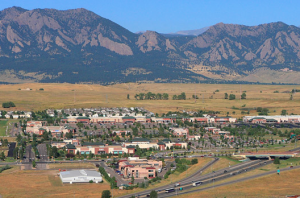 The town of Superior has recently experienced a surge of both residential and commercial real estate growth. The newly built Rock Creek Ranch subdivision has drawn new home buyers to the Superior real estate market, thereby pushing the town's population to 12,000 people.

Beautiful new homes dot the approximately four square mile landscape of Superior. Residents here enjoy access to over 590 acres of park and green space, 27 miles of trails, and pristine undeveloped land. In the commercial sector, new vitality has been brought into the community thanks to the building of the Superior Marketplace Shopping Center.

Superior is located southeast of Boulder, CO, off the Superior/Louisville interchange on Hwy. 36. The town traces its roots to coal mining days, when it was first settled in 1861 by farmer, William C. Hake. He discovered coal on his property, claiming there was "none superior in the state," thus giving the town its name.

During its heyday, Superior housed 400 residents, a school, church, livery stable, three saloons, two pool halls, a general store, a barbershop and two boarding houses. In 1945, the town suffered a serious blow when the Industrial Mine, which employed 200, closed. By 1950, only 250 people remained. Now, there are nearly 12,000 residents, an abundance of commercial and residential development, and gorgeous green space.

Superior's history is one of coal mining. The first mines in the area were developed in the late 1800's. The Town itself was founded in 1896 and incorporated in 1904. The Town reportedly was named after the "superior" quality of coal found in the area. Mining was the major force in Superior's history until the Industrial Mine closed in 1945. Subsequently, many people moved out of the area and the Town evolved into a quiet ranching and farming community. The Town's population hovered around 250 until recently.

The Town's largest residential development is known as Rock Creek Ranch. Although the land was subdivided in 1987, development continues today. Future development plans of the Town include commercial development, retail development, multi-family residential units, and single family homes. The Town is approximately four square miles in area has 594 acres of parks, greenspace, and open space and 27 miles of trails.

Superior In The News