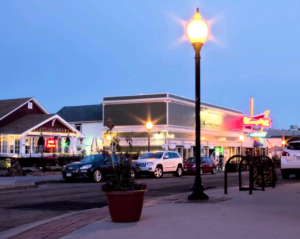 Just a short 10 minute drive east of Boulder, Louisville is growing rapidly in popularity among families, professionals, and home buyers alike. Louisville continues to attract new residents every year because they are drawn to the community's old-fashioned values and welcoming spirit. Along with 26-miles of biking and running trails, a newly built hospital, recreation center, 18-hole golf course, easy access to Boulder and Highway 36, a strong, fast growing real estate market, hip downtown scene, and great schools makes Louisville a top city in Boulder County. The city is catching attention as Louisville was recently selected as one Money Magazine's top three picks in their annual "Best Places to Live in the U.S." survey. Residents of Louisville are known for being friendly, courteous and outgoing, while the town itself has made a strong commitment to preserve and restore the city's "historic downtown" area. New businesses were eager to join the diverse commercial scene since the restoration of city’s downtown and now the historic area is bustling with business, local shops, restaurants, and events.

Since 1970, the population of Louisville has more than tripled to now approximately 20,000 residents. The city is about 8 square miles in size. Despite all the growth, the city of Louisville still retains its small-town feeling.

!In 1877, life began in the historic Louisville business district when coal was discovered. Most of the men worked in the local mines, with their sons often joining them at the age of 14. Everything they needed to support their daily life was available along two streets—Front and Main. Many trains a day passed through Louisville, connecting it with Boulder, Eldorado Springs and Denver. Saloons and brothels were part of the frontier scene, along with schools, churches, boarding houses, shops, restaurants and even a small movie theater. Many of these buildings still stand unchanged in historic downtown Louisville, and remain as shadows of the town's lively past. Although the mines are now closed and silent, they still sit beneath the city; the dark veins of Louisville's original life blood.

Louisville In The News